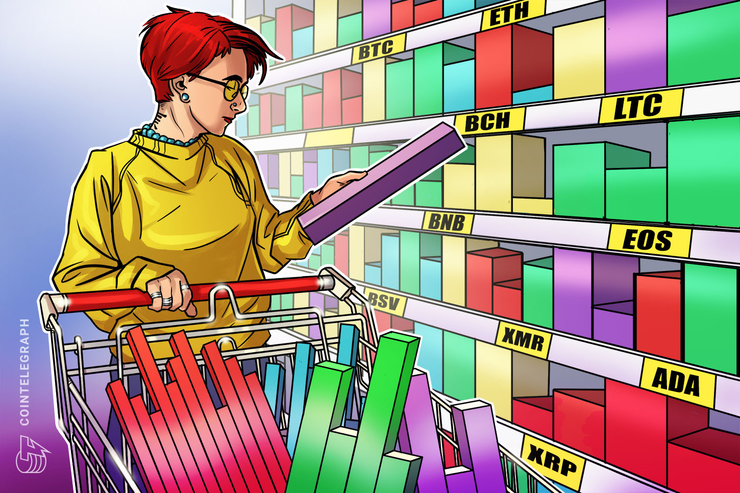 The trade war between the United States and China has stoked fears of a recession. According to a survey by eToro, if a recession occurs, 40% of millennials would prefer to invest in crypto. However, Generation Z and Generation X investors are not convinced by crypto as they have chosen real estate and commodities as their preferred mode of investment.

Gold Bullion International co-founder Dan Tapiero believes that Bitcoin (BTC) is “an invention.” He alluded to the decade-long record of the leading digital currency and said that if a company were to develop such a secure network framework, it would cost them hundreds of billions of dollars.

However, everybody is not convinced about the prospects of cryptocurrencies. Unnamed representatives of the Society for Worldwide Interbank Financial Telecommunications, the world’s leading interbank payments network provider, said that cryptocurrencies are “useless and unstable” as they fluctuate in value like a yo-yo.

What do the charts of the major cryptocurrencies suggest? Is the path of least resistance to the upside or the downside? Let’s find out.

Bitcoin has broken down of the moving averages, which is a bearish sign. It can now again retest the trendline of the symmetrical triangle. Both moving averages are flat and the RSI is just below the midpoint, which points to a consolidation in the near term.

The BTC/USD pair will establish a definite trend after breaking out or breaking down of the triangle. The symmetrical triangle usually works as a continuation pattern but, at times, it also acts as a reversal pattern. Therefore, it is difficult to predict the direction of the breakout.

If bulls push the price above the downtrend line of the symmetrical triangle, the pair is likely to resume its up move and rally to $15,376.96. Traders can ride this move higher by initiating long positions as suggested in our earlier analysis.

Conversely, if bears sink the price below the triangle and the critical support of $9,080, the trend will turn negative and a fall to $7,451.63 is probable. As the price can move either way, we are not recommending a trade inside the triangle.

The bulls have failed to propel Ether (ETH) above the 20-day EMA. It can now again dip to the critical support at $163.755. If this support breaks down, the trend will turn negative and a fall to $150 is probable.

However, if bulls defend the support at $163.755, the ETH/USD pair might remain range-bound for a few days. A breakout of the 20-day EMA will be the first sign that the downtrend is over and a rally above $235.70 will confirm the start of a new uptrend. We might recommend a long position on a breakout above the 50-day SMA. Until then, we remain neutral on the cryptocurrency.

The bounce in XRP again fizzled out at the 20-day EMA. This is a negative sign as it shows that buying dries up at higher levels. Both moving averages are sloping down and the RSI is in the negative zone, which shows that bears are in command.

The sellers will now attempt to sink the price back below the critical support zone of $0.24508–$0.225. If successful, the XRP/USD pair will resume its downtrend and plummet to the next support at $0.19.

Our bearish view will be invalidated if the pair rebounds sharply from the support zone and rises above the 50-day SMA. We suggest traders wait for the cryptocurrency to form a new buy setup before initiating a trade in it.

Bitcoin Cash (BCH) has been trading between the 20-day EMA and the 50-day SMA for the past three days. Both moving averages have flattened out and the RSI is close to the midpoint. This shows a balance between buyers and sellers.

If bulls push the price above the 50-day SMA, a rally to $360 is possible. A breakout of this level can carry the price to $428.54 and above it to $515.35. On the other hand, if bears sink the BCH/USD pair below the 20-day EMA, a retest of the neckline of the head-and-shoulders pattern will be in the cards. A breakdown and close (UTC time) below the neckline will be a huge negative. We will wait for the bulls to assert their supremacy before suggesting a trade in it.

Litecoin (LTC) has been trading close to the 20-day EMA for the past three days, which is a positive sign. The bulls will now attempt to push the price above the 50-day SMA, which will signal a trend change. We will wait for the price to break out and close (UTC time) above the 50-day SMA before suggesting a trade in it.

If the LTC/USD pair turns down from the 50-day SMA, it might remain range-bound for a few days. The flattening 20-day EMA and RSI below 50 also point to a consolidation in the short term. The pair will turn negative if it turns down from current levels or the 50-day SMA and plummets below $58.

Binance Coin (BNB) has broken below the minor support at $20.8857, which is a negative sign. It can now drop to $18.30. With both moving averages sloping down and the RSI in negative territory, the advantage is with the bears. On the downside, we anticipate a strong support between $16 and $18.30 zone.

Contrary to our expectation, if the BNB/USD pair reverses direction from current levels, the bulls will again attempt to push it back above the moving averages. The pair has returned from the 50-day SMA on three occasions. Hence, a break above it will indicate that the bulls are back in the game. There is a minor resistance at $32.50, above which a retest of the lifetime highs will be in the cards. We will wait for the price to break out and close (UTC time) above the 50-day SMA before recommending a trade in it.

However, if the EOS/USD pair bounces off the 20-day EMA and breaks out of the downtrend line, it will signal the end of the downtrend. The next target on the upside is $4.8719. If bulls scale above this level, we expect a new uptrend. Aggressive traders can buy on a close (UTC time) above the downtrend line with a stop loss of $3.

The tight range in Bitcoin SV (BSV) has resolved to the downside. It has broken below the immediate support of $120 and is threatening to break below the critical support of $107. If this support gives way, the decline can extend to $92.933 and below it to $48.64. The moving averages have started to slope down and the RSI has dipped into negative territory. This shows that bears have an advantage in the short term.

Nevertheless, if the BSV/USD pair bounces off the critical support at $107, the bulls will again attempt to propel it above the moving averages. If successful, the pair can move up to $150 and above it to $188.69. We will wait for a reliable buy setup to form before proposing a trade in it.

Failure to break out of the downtrend line has attracted selling. Monero (XMR) is likely to retest the recent low of $65.7316. If bears sink the price below the wedge, a decline to $50 is possible. The 20-day EMA has turned down once again and the RSI has slipped into the negative zone, which shows that bears are back in command.

Our bearish view will be invalidated if the bulls push the XMR/USD pair above the resistance line of the wedge. A breakout of a descending wedge pattern is a bullish sign and it might result in the start of a new uptrend. Therefore, we retain the buy suggested in our previous analysis.

Though Cardano (ADA) broke above the 20-day EMA on Sept. 10, it did not close (UTC time) above it. Hence, our buy recommendation suggested in the previous analysis did not trigger.

A breakout of the 20-day EMA can carry the pair to the 50-day SMA, which might act as a resistance. Therefore, we withdraw the buy recommendation given in our previous analysis. Though the bullish divergence on the RSI is a positive sign, we will wait for the price to break out and sustain above the 20-day EMA before recommending a long position again.