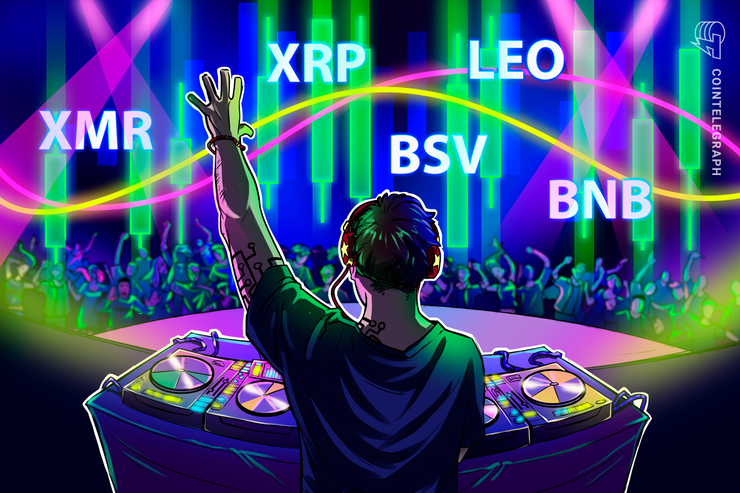 While the fundamentals in the crypto space have been improving over the past few months, repeated opposition to popular projects like Libra has kept the sentiment subdued. Speaking at the International Monetary Fund and World Bank fall meeting, German Federal Minister of Finance Olaf Scholz vehemently opposed the idea of allowing Facebook to create Libra because, according to him, it is the “responsibility of democratic states.”

Similarly, the Financial Action Task Force also voiced its concern on Libra and other stablecoins when its president Xiangmin Liu said that successful creation of these stablecoins can lead to “new risks regarding money laundering and terrorist financing.”

The total market capitalization of cryptocurrencies has been stuck between $210 billion and $230 billion since Sept. 25. This consolidation is unlikely to continue for long. Traders should watch the key levels closely to benefit from the impending move. Let’s analyze the charts of the top five performers of the past seven days and see if find any buying opportunities.

Monero (XMR) has been the best performer of the past seven days. Does its rise from the recent lows indicate that the bulls are using the fall to buy? Is it ready to turn around? Let’s study its chart.

The XMR/USD pair continues to slide inside a falling wedge pattern. Though the bulls have held the support line of the wedge for the past three weeks, they have not been able to achieve a strong bounce off it. This shows that the bulls are not showing any urgency to buy even at these levels. A break below the wedge will be a negative sign that can sink the price to the yearly low of $38.83.

On the upside, a pullback from the current levels will face selling at the resistance line of the wedge. Both moving averages are also placed close to the resistance line of the wedge, hence, a breakout of it will signal that buyers are back in the game. Traders can wait for the price to sustain above the moving averages before initiating long positions. The first target on the upside is $97.9733 and above it $121.427.

Ripple has tied up with Finastra, the third-largest financial services technology firm in the world. This partnership will benefit the existing customers of both companies. Will these positive developments boost XRP prices? Is it ready to start an up move? Let’s analyze the chart.

The XRP/USD pair broke above the 20-week EMA but is finding it difficult to sustain above it. However, it has been in the green for the last three weeks, which is a positive sign. The flattening 20-week EMA and the RSI just below the midpoint suggest that the sellers are losing their grip.

Long-term traders can buy on a close (UTC time) above the downtrend line and keep the stop loss just below the recent low. The target objective is a move to $0.76440 with intermediate resistances at $0.5050 and $0.5650.

Our view will be invalidated if the pair turns down from the current levels and plummets below $0.22. However, we give it a low probability of occurring.

Bitcoin SV (BSV) continues to be in the news due to statements by its backer Craig Wright. However, interest in the altcoin, measured by tweet volume, has dwindled down from its peak in May. Let’s look at its chart and see if we spot any bottoming formation.

The BSV/USD pair has been holding above the $80 support for the past three weeks. This is a positive sign as it shows buying closer to this support. On the upside, the relief rally can reach the previous support turned resistance of $107. We anticipate the bears to launch a strong defense at this level.

UNUS SED LEO (LEO) has risen close to 2% in the past seven days. During the week, it cracked into the list of top 10 cryptocurrencies by market capitalization. How does its prospect look on the chart? Can it rise further? Let’s find out.

Though the LEO/USD pair made a new low recently, the bears have not been able to capitalize on the breakdown. Buying at lower levels has resulted in a pullback that might face resistance in the $1.0075 to $1.0467 zone.

If the bulls can scale above this zone, the pair can move up to $1.35. Though there is a minor resistance at $1.1217, we expect it to be crossed. Aggressive traders can wait for the price to close (UTC time) above $1.05 before buying. The stop loss can be kept at $0.94.

Binance Coin (BNB) has retained its place among the top five performers for the second consecutive week. The week was packed with various positive news flow that kept the price buoyant. Prominent was the launch of a BNB Exchange-Traded Product on a Swiss Stock Exchange, in partnership with a local Swiss startup Amun.

Binance burned 2,061,888 BNB in the latest quarter, worth about $36.7 million. The exchange burns about 20% of the profits it earns. Using this data, the quarterly profit turns out to be about $185 million. The exchange said that Binance Futures — launched on Sept. 13 — was well received by its customers and it reached the number four spot by trading volume in BTC futures on Oct. 8.

Binance CEO Changpeng Zhao said that with institutional participation increasing in the futures platform, the exchange has decided to offer a maximum leverage of up to 125x on Bitcoin futures. Has the fundamental news flow improved the technical picture? Let’s study its chart.

The pullback from the recent lows of $14.2555 has hit a roadblock at the previous support turned resistance of $18.30. We anticipate the bears to defend the zone between $18.30 and the resistance line of the descending channel.

However, if the bulls can propel in the BNB/USD pair above the channel, it will be a positive sign and will point to a change in trend. Therefore, traders can initiate long positions as suggested in our previous analysis.

Contrary to our assumption, if the bulls fail to scale above the resistance zone, the bears will attempt to sink the pair below the critical support of $14.2555. If successful, a drop to the support line of the channel is possible.