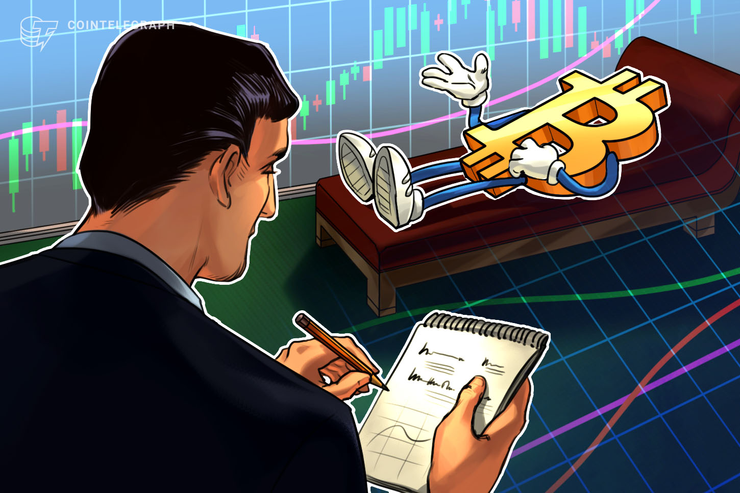 This week Bitcoin (BTC) continued to trade within a tightly defined range and at the time of writing the price is flat. The bulls and bears have been throwing the market back and forth with moments of high volatility on the lower timeframes, all of which are often a sign of a larger move simmering beneath the surface.

The wider market remains in a similar position, although some altcoins like XRP have slightly outperformed Bitcoin over the past 24 hours. 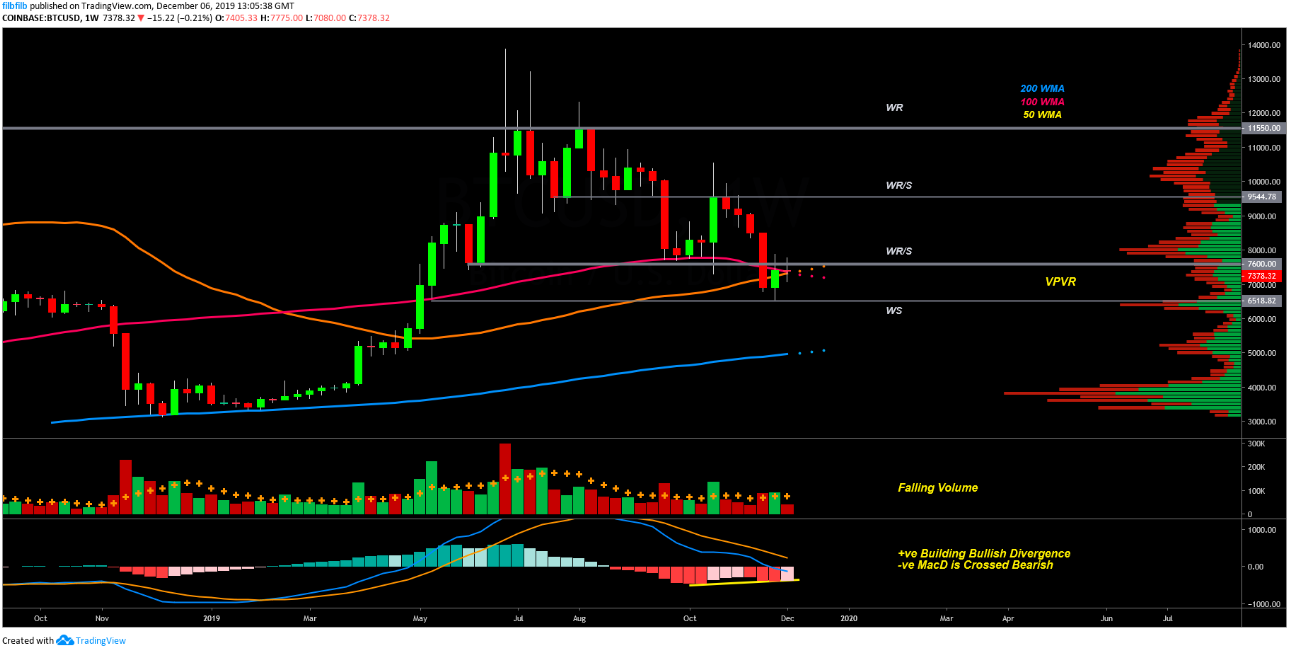 Analyzing the weekly chart shows that Bitcoin has fundamentally been locked in a bearish posture for close to six months and this is defined by the downward sloping diagonal resistance.

Major resistance was found at $11,500 and the $9,500 and $7,500 support eventually turned into resistance. Support has now been found at $6,500 which was a critical bullish rejection level in the first half of the year and is demonstrative of a high volume node on the VPVR.

Bitcoin is currently trading up against previous support which has flipped to resistance and the Doji candlestick is a clear sign of indecision in the market as traders are pushing price within a clear range and coming back to the center.

This shows that the bulls and bears are struggling to find a direction. Bitcoin price can either reverse course or find continuation of the previous candle but ultimately, the current price action defines the week to date quite nicely.

The 50 and 100-week moving average (WMA) are in the process of crossing bullish which has only occurred a few times in Bitcoin’s history and has signaled an impending upside move. It is important to note that moving averages do not drive a market, they lag the market but can help to identify macro changes in the market’s direction.

The 200-WMA is situated in the $5,000 range where there is also some historic volume interest at this price range. Many analysts are calling for a retest of the 200-WMA which would likely be a last line of defense for bulls. This would also be unprecedented at this stage in the Bitcoin market cycle.

Generally, volume on spot exchanges has been decreasing through the circa six-month decline which is typically a sign of sellers becoming exhausted as each push lower entices fewer participants to sell.

The moving average convergence divergence (MACD) has crossed the zero line to the bearish side, meaning that the underlying moving averages are now crossed bearishly. However, there is a higher low forming on the histogram which is an unconfirmed bullish divergence.

Thus, on a macro level, it seems as though the market is either at a turning point or it is looking to prepare for continuation; unlike previous weeks, it is a less clear picture. 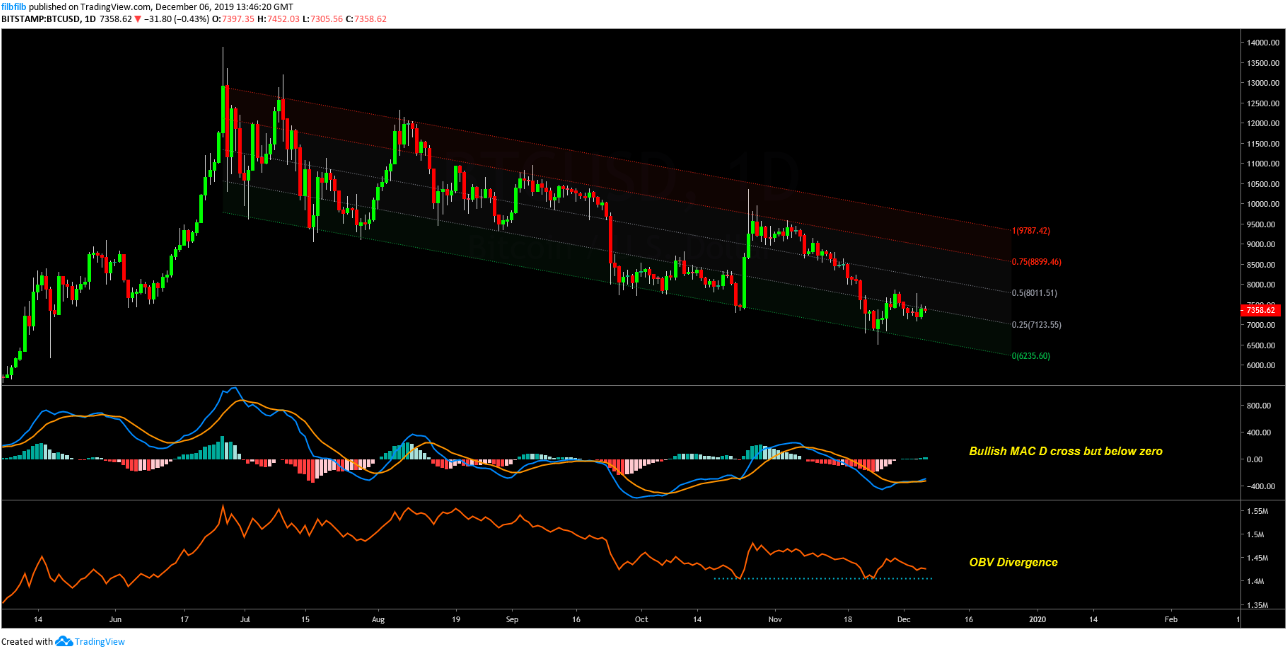 The daily chart clearly shows the downward trending channel in which Bitcoin has spent months trading, defined by lower highs and lower lows. The lower 25% of the channel has acted as support and resistance throughout the downtrend and is once again being tested.

The on-balance volume indicator (OBV), a tool that is demonstrative of the directional strength of cumulative volume, also shows a bullish divergence which is concurrent with the decreasing volume on the weekly chart. The OBV is however still trending down and a break out may imply a turn in the market.

Overall, the daily chart shows a reasonable case for the bulls but is strongly defined by the downtrend which must be respected. 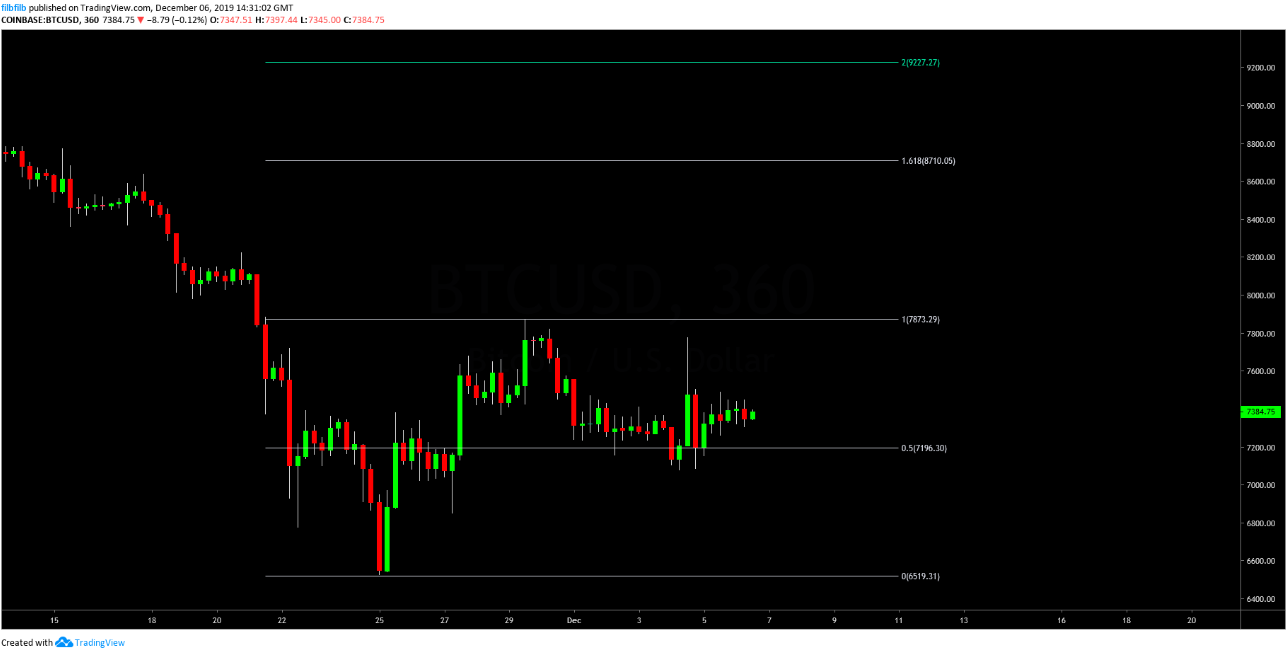 The 4-hour chart shows that Bitcoin is trading within a horizontal range between $7,900 and $6,500 and the digital asset has found support at the equilibrium of the two local extremities. At present, the 50% Fibonacci retracement ($7,200) is acting as support.

This is a positive sign for the bulls who hope to retest the upper $7,000s. However, failure to hold above $7,000 will almost inevitably lead to a retest of $6,500 which is in line with the downward channel on the daily chart. At present, the price action is leaning bullish but only marginally.

If the bulls can reach out and close in the upper $7,000s, Bitcoin price will complete an Adam and Eve pattern, which would imply that a move well into the $8,000s and as high at $9,000 would be possible. This would be quite significant and does make sense as it would mean Bitcoin reclaimed the previous weekly trading range, but at this stage is just pure conjecture rather than a direct prediction of an imminent move.

On the 4-hour timeframe, the MACD is reaching out towards the zero line, painting a higher high on the histogram, both of which are supporting the bullish case in the market. Trading volume is also declining within the range which implies that the market is winding up to make a definitive move. 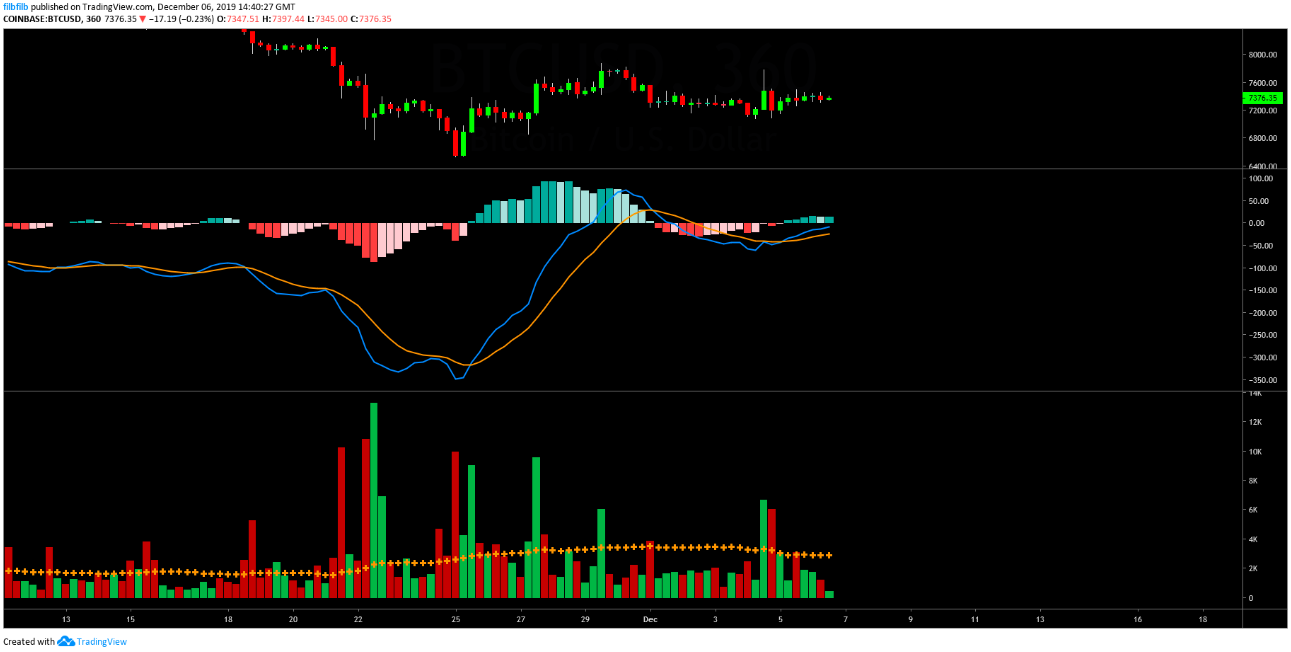 In summary, the market remains in a downtrend so any bullish signs must be taken somewhat lightly. However, it is clear across all timeframes that Bitcoin’s price action is attempting to flip to the bullish side.

There are signs in the trading volume and the momentum in which the decline has somewhat subsided. The likely outcome is that there will be more volatility within this current consolidation before Bitcoin makes more of a definitive move to retest previous critical weekly support and resistance levels.

The views and opinions expressed here are solely those of the (@filbfilb) and do not necessarily reflect the views of Cointelegraph. Every investment and trading move involves risk. You should conduct your own research when making a decision.