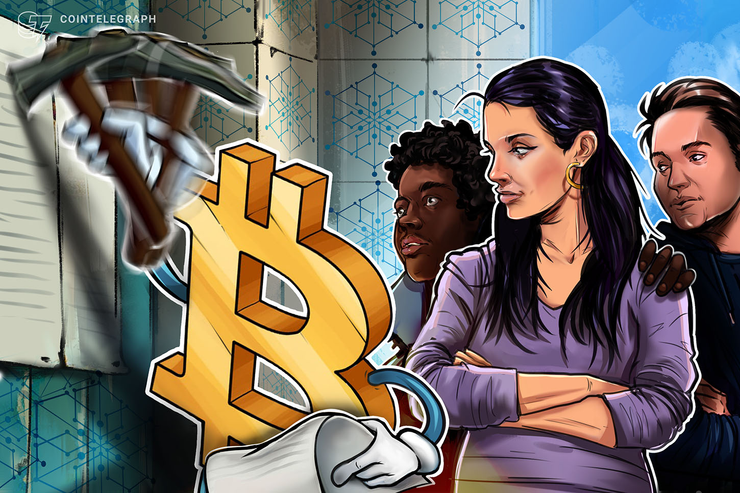 A bit of historical research was making the rounds on social media recently, a monograph that compares the 21st century emergence of Bitcoin, encryption, the internet and millennials with the Protestant Reformation that shook Europe in the 16th and 17th centuries.

The two events have similar dynamics, argues Tuur Demeester, whose white paper, “The Bitcoin Reformation,” is packed with bold predictions about the crypto and blockchain future, such as, “Bitcoin savers could accelerate a revolution in the history of thought.”

The report had 7,000 visits and was downloaded 2,800 times in the first 24 hours of its publishing, announced the author on Twitter on Nov. 8, adding, “translations in French and Finnish on the way.” Demeester, a founding partner of Adamant Capital LP, also said:

“The main thesis of ‘The Bitcoin Reformation’ is that there are four fundamental parallels between the Protestant Reformation and the present day, which could signal profound societal and economic changes ahead.”

It is worth enumerating these four conditions that “enabled” the reformation and may be present again today:

In 16th century Europe, the Catholic Church was a monopolistic provider of spiritual services. The Church also commanded the legal system, “and controlled the keys to heaven via forgiveness of sin.”

Demeester compares the Church with the International Monetary and Financial System, which traces its origins back to the 1944 Bretton Woods agreement that replaced the gold standard with the United States dollar as the global currency. Central banks today, most prominently the U.S. Federal Reserve, control key parts of the legal system as well as “the keys to the wealth and pensions of the world’s citizenry,” argues Demeester.

Sixteenth century Europe gave birth to a number of transformative technological inventions: The printing press, for instance, lowered the cost of a book from a year’s labor to the price of a chicken, notes Demeester, while other innovations like double-entry bookkeeping, the compass and the hourglass accelerated international commerce and exploration.

The parallel is today’s digital revolution, including email, open-source software, cryptography, social media and the commoditization of computation and data storage.

New economic class: People with something to fight for

“Both times involved a new economic class with something to fight for,” writes the author. In the 16th and 17th centuries, it was a new merchant class trying to break the economic stranglehold of feudal landlords and the church. Today, it is a younger generation, the so-called millennials, who exhibit:

“Distinct skepticism towards traditional finance, and enthusiastically embraces digital innovation. A 2016 survey by Facebook found that only 8% of millennials ‘trust financial institutions for guidance,’ and that 45% are ‘ready to switch if a better option comes along.’”

Credible strategies for defense and escape

A citizenry will be reluctant to challenge a domineering authority if they don’t have a means for defense and escape, argues Demeester, and during their revolt against their authoritarian, Catholic Spanish overlords at Alkmaar in 1573, the (Protestant) Dutch breached their dikes and flooded the countryside to raise the siege. They used this tactic repeatedly during their 80-year revolt. In the 21st century:

“The defensive technological suite available for people who question the economic status quo is cryptography — which can enable privacy and protection from asset seizure.”

Demeeter’s monopolist comparison between the Catholic Church of 16th century Europe and the likes of the International Monetary Fund of today resonated with Richard Sylla, Professor Emeritus of Economics at NYU.

“We all know that banks charge you a lot for transferring money,” told Sylla to Cointelegraph. Bitcoin and other cryptos hold the promise of making overseas payments less expensive and more secure. Breaking the banks’ so-called monopoly here would have benefits. But the Federal Reserve and its peer central banks aren’t likely to vanish anytime soon, Sylla said:

“It’s more likely the ‘monopolists’ will participate, with central banks establishing their own digital currency, either separately or collaboration with other countries. Most countries are still jealous of their sovereignty, including the right to print money, and central banks are carefully studying cryptocurrencies — not just Bitcoin, whose price volatility makes it suspect as a currency.”

Not all agree that the Protestant Reformation is the proper historical comparison for today’s financial services upheaval, or “the most fundamental transformation in history,” as Nigel Green, founder and CEO of deVere Group, told Cointelegraph:

“I believe these contemporary changes are similar to other financial sector milestones, such as the Rothschild family establishing their banks in the late 18th century, the deregulation of the [financial services] sector in the 1980s, and the 2008 global financial crash. And it is fintech, in all its many forms including cryptocurrencies like Bitcoin, that is fueling this.”

Demeester is associated with the Austrian School of Economics, which some dismiss as “simply a religion serving to justify libertarian policy conclusions.” One social media response to the The Bitcoin Reformation suggested:

“If #crypto spent as much time turning decentralized immutable databases into useful products or services that we all want/need as they do trying to convert people to a religion of ‘sound money’ that’s anything but, and wishing for the world to end so $BTC can be more valuable, that would be nice.”

Still, Demeester’s 23-part Twitter summary of The Bitcoin Reformation prompted 435 retweets and over 1000 likes. Demeester ranks 5th on Hive’s list of top crypto “influencers,” and his tweetstorm may have fallen upon mostly sympathetic ears.

Although, in response to the author’s statement that “we see broad parts of society, millennials especially, acting increasingly critical of central bank interventionism,” one dissenter replied, “I wish this were true, but don’t see any evidence of it. I would guess 99% of millennials don’t even know what a central bank is.” Another commented:

“I’m struggling to see how you put millennials and Bitcoin into the same basket. Millennials tend to care the most of any generation about the environment. Bitcoin doesn’t align with this.”

Coinmetrics.io co-founder and Castle Island Ventures partner Nic Carter applauded Demeester for “recognizing the higher role of private, non-state money — as a significant social and political phenomenon,” he told Cointelegraph. The comparison with the Protestant revolution was useful in raising the Bitcoin conversation to its proper level, according to him. Carter went on to add that he found the white paper “quite compelling, refreshing”:

“Too often detractors dismiss it as a minor technological innovation, like an advance in database software, or just a more efficient way to do payment processing — as opposed to an institutional revolution.”

There are no shortage of provocative comparisons of past and present in “The Bitcoin Reformation.” Demeester describes how the Dutch Republic accessed capital through proto-annuities, and compares with today’s initial exchange offering tokens, which also tap the market for liquidity.

Each era has had its memes and slogans that drive the idea of cutting out the middleman. The Reformation’s “Sola Fide” (faith alone is enough, no need for a priest) is paralleled by the Bitcoin era’s “Vires in Numeris” (strength in numbers) and Tyler Winklevoss’ quote, “We have elected to put our money and faith in a mathematical framework that is free of politics and human error.”

The author offers seven “suggested” conclusions — predictions, really — ranging from the momentous “Bitcoin tolerance versus intolerance to become a major political faultline” to the circumscribed “Initial exchange offerings (IEOs) expected to stay and grow larger.” Unfortunately, these predictions aren’t really elaborated upon or supported in the report’s text. They rather seem to be food for future thought.

Will the Fed co-opt digital currency?

The Protestant Reformation was a religious revolution. It essentially drove the Catholic Church out of most of Northern Europe. Bitcoin and its underlying blockchain technology may not rise to this level of social and economic upheaval.

Yes, the new technologies may supplant the “banking monopoly” in some areas where it is arguably overcharging for its services, such as cross-border payments, but these are essentially tweaks, incremental improvements to the financial system.

By comparison, Bitcoin won’t stop the Federal Reserve from printing more U.S. dollars — not anytime soon, anyway. The more likely scenario, as Sylla suggests, is the Fed co-opts digital currency, as Facebook is trying to do with Libra. This possibility isn’t considered in the report.

Overall, though, as much as one might delight in historical analogies, the real problem, as the author of The Bitcoin Reformation himself acknowledges, is that secular trends are often only visible in hindsight.