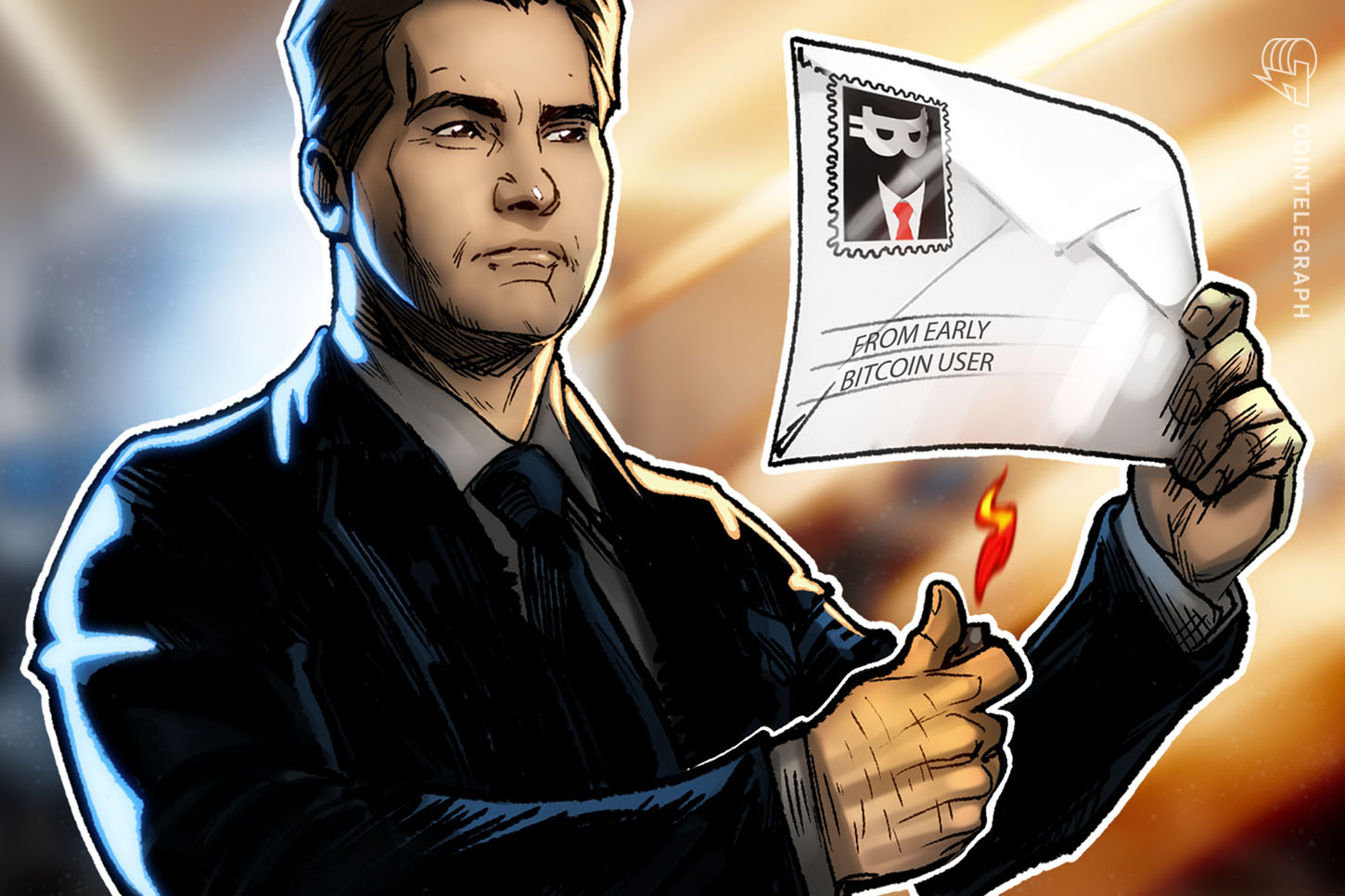 Infamous cryptocurrency figure Craig Wright faces newfound legal challenges over more than 1 million Bitcoin (BTC) after addresses listed in the Tulip Trust were used to sign a message labeling him a fraud. Wright has long been a divisive figure within the cryptocurrency community, having made unverified claims of being Satoshi Nakamoto, the founder of Bitcoin.

These claims have been met with derision and disbelief by various prominent industry participants, including Ethereum founder Vitalik Buterin, podcast host Peter McCormack and Bitcoin Cash (BCH) proponent Roger Ver. Wright went as far as filing lawsuits for libel in the United Kingdom against McCormack, while Buterin and Ver were also recipients of legal notices from Wright’s lawyers. Wright’s initial case against Ver was dismissed in a U.K. court, and although he appealed the dismissal, it was then dismissed again by the court on May 29.

Wright has also been embroiled in a lengthy court case relating to the estate of his former business partner since 2018. Ira Kleiman, the brother of Wright’s late business partner David Kleiman, has laid claim to half of 1.1 million BTC that Wright and Kleiman reportedly mined together as part of a group of people who worked on creating the Bitcoin network.

As Cointelegraph has previously reported, the Kleiman legal team is not out to prove or disprove the actual identity of Satoshi Nakamoto, but provide enough evidence in order for their clients to be awarded the claim to proceeds purportedly held by Wright. The case essentially rests on the ability of either proving or disproving that Wright is in possession of various private keys to early wallets that are believed to belong or have been used by Satoshi.

A long history of claims

Wright’s reputation in the crypto community has been under a cloud for many years, given his history of claims and aggressive rhetoric toward industry peers. Back in May 2016, Wright claimed to have access to the cryptographic keys associated with the first Bitcoin blocks ever mined in a blog post — which was subsequently covered by mainstream media outlets, including the BBC, GQ and The Economist.

Wright subsequently went back on his claim that he was Satoshi Nakamoto in a post that was published on his website just days after his initial claims had been made. He refused to make good on a prior promise to further prove he was indeed Bitcoin’s pseudonymous creator by actually moving Bitcoin believed to belong to Satoshi. There have been a number of incidents where Wright has made confusing statements in order to further justify his assertions that he is Bitcoin’s creator. In 2019, he claimed that Satoshi had plagiarized large portions of work from one of his theses written in 2008, adding more to the confusion: “Either I am Satoshi or Satoshi plagiarized me. You can make the choice, I don’t really care.”

Just over a year ago, Wright went as far as filing a copyright claim in the United States for the original Bitcoin white paper, as well as a major portion of the code used to build the cryptocurrency. As previously reported, the U.S. Copyright Office does not check the validity of any statement or claim made to a copyright. Furthermore, it does not legally validate any identity.

Wright’s assertions that he is Satoshi Nakamoto have been intrinsically tied to his ongoing legal battle with the Kleiman estate since 2018, which is demanding half of over 1 million BTC that Wright and David Kleiman had mined together in the early years after Bitcoin’s inception. Wright maintains that he and Kleiman had tied up the BTC holdings into the “Tulip Trust” — which can only be accessed with private keys to the various wallets holding the BTC.

As this Reddit post explains, Wright supposedly split up private keys “into several parts using a Shamir’s Secret Sharing Scheme,” which were then distributed to trustees. Wright lost access to the holdings — a list of addresses in an encrypted file — when David Kleiman died but said that the various private keys that are needed to unlock the BTC held in the trust would be delivered by a bonded courier at the beginning of 2020.

In the months leading up to that, Wright had been ordered to deliver addresses that contained some of the BTC holdings of the Tulip Trust. While he told the court that it was impossible to do that due to the way he had split up the root private keys when the trust was created. Nevertheless, Wright did supply a number of blocks that potentially belonged to him in the Tulip Trust with the help of nChain midway through 2019. That list was met with scrutiny for various reasons, including the fact that some of the blocks’ coin base had been spent.

Media houses speculated that the mysterious bonded courier delivered the package to Wright in January 2020 after his legal team notified the court that he had produced a list of his Bitcoin holdings. Again, this list was heavily scrutinized by the Bitcoin community and was almost identical to the list that had been provided in 2019.

In an interview with Wright published by Cointelegraph on Jan. 23, 2020, he explained that he had set up the trust to protect the funds and had deliberately decided not to be a trustee. That meant that he could not be forced to move funds by a third party. Wright also said that he was still awaiting the delivery of keys to access the funds.

Wright’s provision of public addresses to the courts in January could potentially be the fuel to drive the Kleiman estate’s legal case after recent developments. On May 20, news broke that 50 BTC had been moved from an address that contained coins that had been mined in February 2009, some six weeks after the Bitcoin mainnet went live. The address contained a coin base transaction of 50 BTC, which is the transaction containing the reward to a miner.

The cryptocurrency community was awash with speculation that Satoshi Nakamoto may have been responsible for the transaction, given that the address contained coins mined so soon after inception.

Nevertheless, that summation has also been questioned by various industry participants, including renowned cryptographer Adam Back, who cast aspersions on the address being linked to one address identified in the “Patoshi Pattern.” The Patoshi Pattern was identified by Bitcoin researcher Sergio Demian Lerner, who told Cointelegraph soon after the news broke that he didn’t think the transaction had been carried out by Satoshi.

Bitfury’s Crystal also released its own insights into the transactions and echoed Back’s belief that the actions were not carried out by Satoshi. Crystal CEO Marina Khaustova told Cointelegraph that the company’s clustering tool identified that the majority of the addresses did not line up with the Patoshi Pattern address.

However, the address itself is weaved into the Wright vs. Kleiman legal battle, as it is one of the addresses provided by Wright in the preliminary list of addresses of the Tulip Trust. Wright has since denied moving the coins on May 20, while claiming the address was not among those given to the court in January 2020.

Wright was thrown another curveball just days later, as a message calling him a “liar and a fraud” was signed alongside a list of 145 addresses and their corresponding signatures. These addresses all contain Bitcoin mined in the first few years of its creation. Perhaps more damning was the fact that various members of the crypto community verified that all of the addresses were found among the list of addresses listed as part of the Tulip Trust. This has been independently verified by Cointelegraph as well.

The Kleiman estate’s legal team has wasted no time pouncing on the fact that these addresses that were listed by Wright are seemingly controlled by someone else and submitted a notice of supplementary evidence to argue that the “CSW Filed List” provided by Wright’s legal team in January was fabricated:

The Kleiman legal team still believes that Wright has access to these Bitcoin holdings and has been hiding the true list from the court. Cointelegraph reached out to United States-based corporate lawyer Dean Steinbeck to ascertain whether the recent development could be used against Wright successfully by the Kleiman legal team. Steinbeck believes that the information will be used to demonstrate that Wright is not in control of the addresses he’s previously claimed to own:

“This information pretty much confirms what many industry pundits have thought all along: Wright is not Satoshi. This turn of events will negatively impact Wright’s claims. In order for Wright to continue asserting that he has control of these addresses, he will need to argue that either he sent the messages calling himself a fraud or he will need to argue that his accounts were hacked. Either argument is unbelievable to anyone familiar with how crypto works.”

New York-based lawyer Daniel Kelman also weighed in on the situation and the potential effect it will have on the Wright vs. Kleiman case. Kelman told Cointelegraph that these latest developments could have serious knock-on effects for Wright, saying: “The judges have already stated on record that they did not find Wright’s testimony believable.” He added:

“These addresses provide mathematical proof that Wright perjured himself. So, the question now becomes (1) whether this will result in a return of the sanctions from last summer (which were set aside on appeal) and a judgement for billions to Kleiman based on the sanctions (rather than the case’s merits); and (b) whether Wright’s perjury will be referred to a U.S. attorney to bring him up on felony perjury charges.”

As Kelman elaborated, there is far more to the story that needs to be considered and that Wright has potentially cornered himself in this dispute because of his assertions that he is Satoshi Nakamoto, adding that “the backstory to this dispute is more complicated than what we see in court papers.” Kelman believes that Wright went along with the case for the sake of keeping nChain and BSV afloat while also hoping to eventually settle, but once damages began to pile up, it no longer became an option. Kelman concluded:

“What Wright probably didn’t consider before he embarked on his defense is that he could in fact wind up on the hook for Satoshi’s billions by virtue of court sanctions for perjuring himself, which happened last summer, and he managed to have set aside on appeal. Those sanctions could now come back and hand a major victory to Kleiman.”

Nevertheless, it seems clear that these latest moves by entities controlling these legacy addresses could have dire consequences for Wright’s legal case and his reputation. Steinbeck explained that Wright could face a criminal conviction if he’s found guilty of perjury:

“If it is ultimately determined that Wright perjured himself by providing the court with knowingly false information, Wright can face severe legal consequences, including the possibility of criminal action. Perjury is considered a serious offense and is treated as a felony. If Wright is convicted on such a charge, he may be imprisoned up to five years and face hefty civil penalties.”