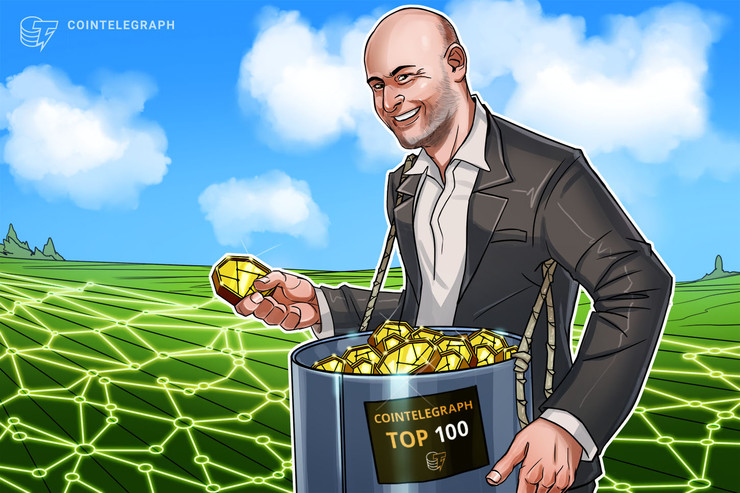 Canadian entrepreneur and software engineer Joseph Lubin helped spearhead the development of the open-source smart contract blockchain platform that came to be known as Ethereum. Lubin has long believed that this technology could serve “as an organizing principle for earth, the world, the planet.”

As one of the wealthiest and most influential public figures in the industry, Lubin founded ConsenSys, a company that develops Ethereum-based products and tools to increase adoption of Ethereum applications around the world, taking the view that the decentralized future is already here — just unevenly distributed.

Joe Lubin was born in 1964 in Toronto, Canada, with his father engaged in dental practice, while his mother worked as a real estate agent. In the early 1980s, Lubin began his study at Princeton University in electrical engineering and computer science. Following graduation in 1987, he spent three years working at Princeton’s Robotics and Expert Systems Laboratory as a manager, devoting himself to the exploration of the machine vision, artificial neural networks, autonomous road vehicle, 3D graphics and robotics.

The circumstances were such that in Princeton, Lubin was a roommate of Michael Novogratz , who studied economics and subsequently became a Wall Street veteran and a longstanding advocate of digital currency. Lubin spent the 1990s and 2000s in close quarters with the financial world, developing software for Goldman Sachs’ private wealth management division as the vice president of technology. He later established a hedge fund.

Lubin was among those who believed that the 2008 global financial crisis would plunge the global economy into an extended recession that would take “20+ years for the snake to digest this elephant of debt.” Indeed, the crisis reportedly resulted in a decline in the net worth of American households by nearly $17 trillion in inflation-adjusted terms, as well as a doubled rate of unemployment, with about 7.5 million jobs lost between 2007 and 2009.

Years later, in reference to the financial crisis of 2008, Lubin recalled: “Many people were disenchanted, disillusioned. So, when the Bitcoin white paper came along, it really captured the imagination of many people.”

As the financial instability afflicting the whole world seemed to have no end, monetary systems appeared to Lubin as though they were approaching the end of a life mired in corruption. Speaking at the Ethereal Summit in May 2017, Lubin said:

“It was folly to trust all those structures that we implicitly felt had our best interests at heart. I felt we were living in a global society and economy that was figuratively, literally and morally bankrupt.”

In the recession years, Lubin decided to transition from the world of finance and eventually made a turn to the music business in 2012 by founding music management company SyNerG Music. However, the real turning point in Lubin’s career happened two years after the company’s launch.

Fascinated with the idea and purported opportunity to transform the existing financial system by removing the third party, Lubin continued exploring the space until he stumbled upon the first version of the Ethereum white paper in the beginning of 2014, written by 19-year-old Russian-Canadian Vitalik Buterin.

The Ethereum blockchain network was claimed to outperform Bitcoin in a number of ways, enabling the deployment of smart contracts and the development of decentralized applications without control or involvement of a third party. Moreover, Ether (ETH) transactions were confirmed in seconds, while Bitcoin’s took minutes.

“Vitalik’s paper was the best that I had read,” Lubin eventually said. He became committed to supporting the Ethereum project and did not waste any time meeting Buterin. Lubin later recalled:

“In November 2013, Vitalik Buterin wrote the first version of the Ethereum White Paper. On January 1, 2014, I spoke with Vitalik about it and received a copy. It sketched a set of mechanisms that would enable the concrete development of that comprehensive vision that many of us glimpsed when we had that initial Bitcoin moment. That was my Ethereal moment.”

Thus, Lubin, who is in his mid-50s, joined the team of Ethereum developers and promoters as a co-founder and the chief operating officer. The further development of Ethereum was funded through an online crowdsale — which raised over $18 million — in the summer of 2014, for which Lubin and Ethereum’s other co-founder, Anthony Di Iorio, reportedly provided up to 95% of the funding.

In 2014, Lubin also held the position of chief operating officer at Ethereum Switzerland GmbH, a company that supported the development of the Ethereum platform, and he co-founded the Ethereum Foundation, a Toronto-based nonprofit organization whose objective is to promote and support Ethereum platform and base layer research, among other things.

However, not long after Lubin joined the Ethereum founding team, things became complicated. That same year, Lubin and Buterin differed in their views concerning the motives and methods of carrying out business: Lubin saw the future of the project in the building of a commercial ecosystem around Ethereum, while Buterin continued to focus on the technology.

The schism resulted in the formation of Lubin’s new company, ConsenSys, which develops software primarily for the Ethereum blockchain system.

Lubin’s new, blockchain-focused organization eventually united developers, businessmen, programmers, journalists, lawyers and other industry enthusiasts in a bid to create and promote blockchain infrastructure and peer-to-peer applications. The organization was founded in 2014 and is currently headquartered in New York.

The ConsenSys incubator is engaged in multiple blockchain-related projects, including the creation, management and trading of fractional ownership shares in real estate assets, development of peer-to-peer trading, engaging in prediction markets, and providing cryptographic tool for managing and signing documents, among many other functions. ConsenSys’ technology has also been recognized by and collaborated on by philanthropic organizations such as the World Wildlife Fund and Oxfam.

Lubin estimated that ConsenSys is probably 65% focused on public mainnet, although everything the company does is applicable in a private permissions context as well.

In late 2018 and throughout 2019, ConsenSys — now the world’s leading DApps development firm — was hit by a series of upheavals. In December 2018, Lubin was rumored to have made significant cuts to the company’s staff, letting go up to 50% to 60% of its workforce counting 1,200.

Later, ConsenSys asserted that the staff cuts were a “natural movement,” mainly affected support employees, and did not exceed 13% of the company’s headcount. In the spring of 2019, ConsenSys saw a major restructuring of its various operations to bolster its market presence as it sought $200 million in funding.

Finally, ConsenSys confirmed to Cointelegraph in December of last year that local offices in India and the Philippines would be shut down and that 11 employees were being laid off.

A new blow was delivered in July 2019, when the founder of ConsenSys-incubated startup Token Foundry, Harrison Hines, filed a lawsuit against Lubin in connection with a “breach of contract, conversion, quantum meruit, unjust enrichment, fraud, declaratory judgment and unpaid profits arising from the defendants’ acts in connection with the business known as Token Foundry.” Hines intended to collect over $13 million.

“It’s been several different ConsenSyses since the start. For roughly four years we were working to be a big part of opening up an ecosystem, and now there are lots of entities pouring into the ecosystem, and we have to up our game and compete. It no longer is sufficient to show up and do something cool; now we have to do something excellent.”

Despite reported difficulties, ConsenSys has continued actively investing in startups and initiatives engaged in developing blockchain-based applications that it considers to be promising, as well as projects like MetaMask that facilitate the entire Ethereum ecosystem. In mid-October last year, the company selected seven new Ethereum-based projects to support, committing a total of $175,000 in funding.

At the time, the company’s head of experiential marketing Yadira Blocker said: “In Wave 1, we saw a lot of applications but they weren’t super strong. In Wave 2, we started to see more credible teams and more unique ideas come to the table.” As part of Wave 3, ConsenSys chose Ethereum software client Lighthouse and mobile decentralized applications constructor Alice. On Feb. 11, 2020, it came to light that JP Morgan was considering merging its in-house blockchain unit, Quorum, with ConsenSys.

Still, the most anticipated development for the current year is likely the release of Ethereum 2.0.

Ethereum 2.0, also called Serenity, is a major network upgrade on the Ethereum blockchain that is designed to shift its current proof-of-work consensus algorithm to proof-of-stake. The upgrade is expected to bring a number of extreme developments, such as realization of a new scalability paradigm called sharding and the introduction of a more efficient Ethereum Virtual Machine capable of executing high-performance smart contracts.

Lubin stipulated that the development of Ethereum 2.0 would bring a drastic scalability to the ecosystem, making the Ethereum blockchain about 1,000 times more scalable. The upgrade is geared to be used by software developers, with the subsequent deployment of their products based on the Ethereum blockchain by their customers — from governments and enterprises to journalism and music platforms.

“As we tokenize the world, well-resourced financial houses and traders will spare no effort to manipulate markets for gain or political advantage. We don’t want the liquid deep token markets of the next generation economy to be similarly vulnerable. We must not choose anything other than a maximally decentralized base as the foundational settlement layer of the global economy.”

Lubin admitted that he would like to see more participation from China in the Ethereum ecosystem, and that he hopes China’s central bank digital currency, or CBDC, would allow for interoperability with public permissionless blockchains, including Ethereum.

Lubin also noted that he expects that China will continue to undermine the status of the United States dollar as the world reserve currency. But he also believes that China’s CBDC will only have a minor impact in this regard. He pointed out the efforts of Russia and China to conduct business without using the U.S. dollar, and concluded:

“There are lots of reasons why American influence is shrinking and will probably continue to shrink. That may not be a bad thing but in some ways, it’ll be a bad thing. China’s particular cryptocurrency I don’t think is a major factor.”

“In the last year or so it’s become clear that what I’ve been saying for a long time, that our global financial and economic systems are essentially bankrupt, and the central bankers have been kicking the can down the road for a long time, and now that yield curves are flattening we may not have enough dry powder in the central banks to kick the can down the road and this recession could be really problematic. So I’ve been talking about potential cascading collapses if certain contagions happen,” said Lubin.

As Ajit Tripathi, former partner at ConsenSys, said: “Joe has something about him, he is an inspirational figure, he has this ability to excite people about this future.”

Joseph Lubin is ranked #7 in the first-ever Cointelegraph Top 100 in crypto and blockchain.