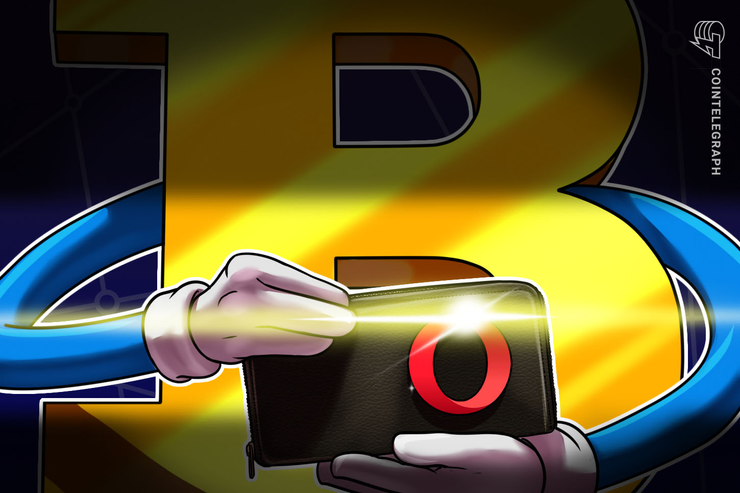 In October, web browser developer Opera Software AS launched added support for in-browser transactions with Bitcoin (BTC) and Tron (TRX). This follows the company’s initial launch of an in-browser Ether (ETH) wallet in 2018. The latest announcement is part of the company’s grander plan to make the “Web 3.0” easier to access for the average consumer.

Opera, based in Norway, is the first major browser to develop and integrate a native crypto wallet, which also supports direct transactions. The company started testing the in-browser payment feature in July through a beta version of the Opera for Android browser.

Opera’s move fits into a larger narrative of companies integrating cryptocurrency into existing systems and networks that people already use. Brave Software Inc., another web browser developer, had first incorporated wallet technology into its browser to allow web users to earn cryptocurrency for performing or permitting certain actions that they already do with traditional browsers without earning anything. Other platforms looking to implement similar Web 3.0 features are also active.

That’s thanks to the browser’s popularity in the developing world, especially Africa. Opera browsers are popular for their data-saving features. The company claimed that data savings in its products helped users in Africa save nearly $100 million in 2018.

Therefore, making crypto wallets easily accessible to this group of consumers could be a big step toward using cryptocurrencies to offer financial services to the unbanked and underbanked. In addition to Bitcoin, Ether and Tron, the Opera crypto wallet also supports ERC-20 and TRC-10 tokens. Multiple decentralized financial, or DeFi, products are already being built using certain ERC tokens.

Opera’s push to expand access to Web 3.0 could also impact the burgeoning betting industry in Africa. The combined size of the gambling market in Kenya, Nigeria and South Africa was worth an estimated $37 billion in 2018.

When asked on how Opera’s latest developments could potentially help onboard new crypto users through gambling, Tron founder and CEO Justin Sun told Cointelegraph that Wink, a decentralized application built on the Tron blockchain is working now with seamless integration.

“Users can simply use the Opera browser to play Wink by logging onto Wink.org without using any 3rd party wallets. We expect to see more TRON DApps integrated within Opera in the future, in similar fashion.”

According to Opera, 350 million people use its browsers globally — nearly 120 million of those are in Africa. It’s worth noting, however, that Opera’s crypto wallet is only available on the “Opera browser with free VPN” application on Android and the “Opera Touch” browser on iOS.

There isn’t any data to tell what portion of the 350 million users use Opera Mini. Still, this means that the crypto wallet is available to fewer than 350 million users. If Opera Mini has the largest user base, then the number of people who can use the Opera crypto wallet could be significantly lower. Opera didn’t respond to a request for comment regarding this.

Incorporation into an existing network is becoming a trend

Opera isn’t the first company to have integrated functionalities for cryptocurrencies into an existing network to foster quicker adoption, as the Brave browser is another web-surfing tool spearheading the crypto charge.

Brave was the first to reimagine using browsers as a tool to foster crypto adoption through its privacy-focused Brave browser. The browser gives internet users power over their data by blocking tracking services and ads.

Instead, Brave allows users to earn native Basic Attention Token (BAT) when they view advertisements. Users can also use the BAT to reward platforms and content creators of their liking. The browser recently reached 9 million active monthly users.

As Opera appears to be targeting the user base that cares about cost-saving for crypto adoption, Brave’s target is the privacy-loving customers.

In August, Brave went beyond its native wallet that only supports its rewards programs to integrate an Ether wallet that supports ETH as well as most Ethereum tokens and collectibles. Unlike its Brave Rewards system, the Ether wallet doesn’t require users to take part in Know Your Customer procedure and can interact with DApps.

The browser also allows users to connect a hardware wallet in addition to other layers of protection, according to Brian Bondy, Brave’s chief technology officer and co-founder, who told Cointelegraph:

“Our Crypto Wallets feature can be used with hardware wallets (Ledger, Trezor) for users who would like the added security. Additionally, our Crypto Wallet is based on an extension and the background page for that extension has its own process and address space.”

Brave has made it clear, however, that its wallet is targeted at “people who already have a working understanding of cryptocurrency generally.” Still, Brave appears interested in using the existing browser network to further the adoption of blockchain and cryptocurrency.

“We’re excited to continue pushing the envelope when it comes to support for cryptocurrency and other blockchain applications on the web platform,” Brave said in its announcement of its crypto wallet.

Beyond browsers, different companies are tapping into existing networks and systems to promote the use of cryptocurrencies. In September, Argentina-based IOV Labs acquired Spanish-oriented social media platform Taringa, which has 30 million users.

IOV Labs, which powers the RSK Bitcoin smart contact platform, sees an opportunity in tapping into data from the social network to build, test and distribute decentralized products based on its smart contract platform and its native RIF token. In the end, it hopes to bring wider adoption to Bitcoin. IOV Labs CEO Diego Gutiérrez Zaldívar told Cointelegraph that:

“Latin America, a market already in need of financial services as half of the population is unbanked. The values inherent in the development of Bitcoin, blockchain and Taringa are one and the same, empowering individuals by giving them a voice and the economic tools they need to thrive.”

IOV Labs plans to incentivize Taringa users to participate meaningfully in the communities hosted on the social network by rewarding them with RIF tokens. Zaldívar added that:

“We know blockchain technology can meet the existing needs of these users far more effectively than existing systems, by protecting user privacy, and sharing the economic value and reputation users create with their interactions.”

In 2017, Aptoide started developing AppCoins, an open-source and distributed protocol for app stores based on the Ethereum blockchain. It raised over $16.8 million in an initial coin offering for AppCoins’ development. For Aptoide, which claimed to have more than 200 million users, integrating a blockchain-based system was a natural step, owing to its community-oriented approach to app distribution.

Aptoide’s chief operating officer and creator, Álvaro Pinto, told Cointelegraph that Aptoide has been a community-driven app store since inception. With Aptoide, users can create their own list of apps, which can be shared with family, friends and colleagues to foster deeper app engagement.

Part of Aptoide’s aim is to make in-app payment simpler in emerging markets, where it has the majority of its users. In these countries, it can be difficult for users to make in-app purchases because one can only buy them using a credit card, PayPal and gift cards as Pinto explained:

“We have this huge amount of people using smartphones, but if you look into the number, the number of users doing in-app purchases and buying digital goods in the app stores is very limited.”

However, Pinto is adamant that the problem isn’t affordability. He believes that many people can afford to make 50-cent purchases, but the process for making such purchases is difficult. Pinto added:

“We’re starting to see the common user having their first experience with blockchain, and that was part of the idea — to take blockchain to the average user and to all this gigantic user base of Android.”